The Mayor of the municipality and head of the Department of Public Safety, José Sampere, this morning handed over 21 new bulletproof vests for all the officers who make up the Local Police Force of San Fulgencio, accompanied by its Chief Commissioner, Cristóbal Rodríguez.

This new equipment and its identifying velcro has been purchased by the Department of Security for a value of 16,317 euros. The objective, as indicated by the mayor, is “to have a well-prepared and well-equipped police force, equipped with the right working tools to carry out its work of protecting the citizens of San Fulgencio more easily and in the best possible safety conditions”. The waistcoats model PBH610XSG/PROTECOP GPB are also resistant against sharp objects, with a resistance of 24 joules according to the applicable regulations.

Last Saturday the town celebrated the feast of the Holy Guardian Angels, patron saints of the Local Police, with an act of imposition of decorations and medals in the Town Hall in recognition of the actions carried out in 2022 and its agents with 25 years of service, also thanking them for the work they do every day to maintain security in the municipality. 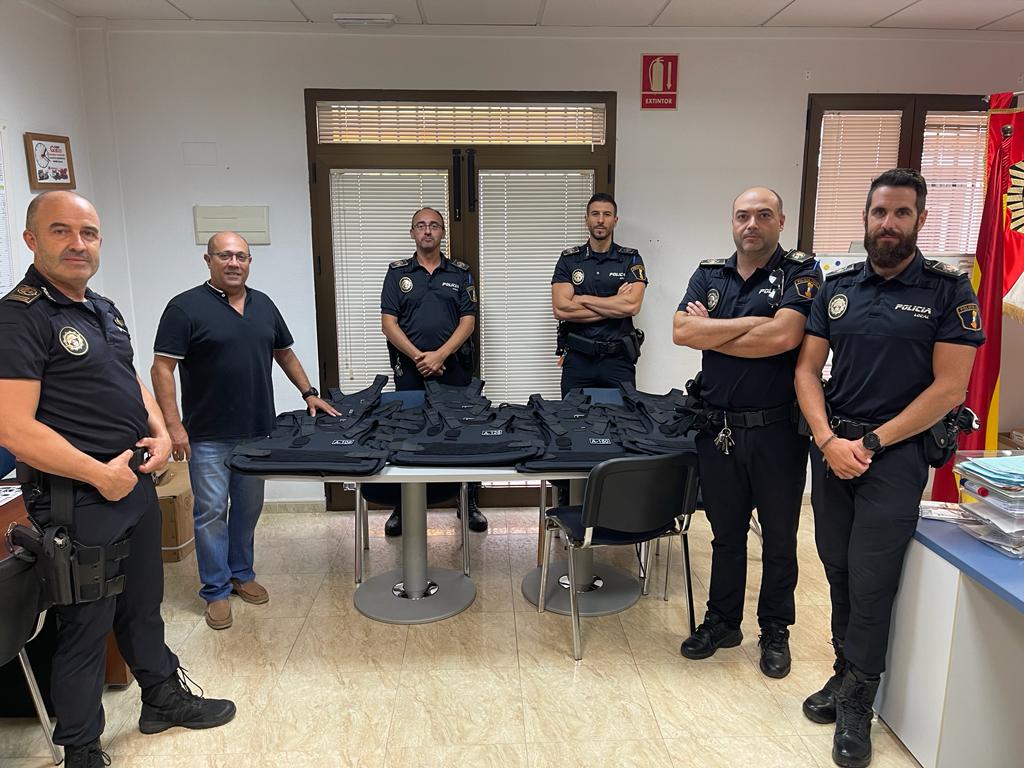 The San Fulgencio Town Council Plenary approved yesterday, in an extraordinary meeting, three new plans of action in case of emergencies in the local area. These are the Municipal Action Plan for Seismic Risk (PAMRI), the Reduced Local Plan for the Prevention of Forest Fires, and the Municipal Territorial Emergency Plan (PAM). The aim of these documents is to coordinate the actions and resources, both public and private, that can be used to resolve emergency situations that may arise in the event of fire, earthquake or any other type of emergency at municipal level.

The mayor and head of the Department of Public Safety, José Sampere, reported that the Municipal Territorial Emergency Plan “lays the foundations and guidelines necessary to manage general emergencies, such as strong winds, cold and heat waves, or situations caused by large concentrations of people”, while the other two specific plans “respond to the increased risk we have in the town when it comes to forest fires due to high summer temperatures and the large amount of land that does not have the proper maintenance and cleaning by their owners”. Likewise, the Plan de Actuación Municipal frente al Riesgo Sísmico (PAMRI) responds to the intrinsic risk of earthquakes in the southeast of the peninsula, the most active seismic zone in the Valencian Community and one of the most intense in the whole of Spain.

In addition to taking into account the geographical, meteorological and population characteristics, the three plans establish the specific characteristics of action for each type of emergency, by establishing the different emergency command and organisation bodies. This command, called CECOPAL (Municipal Operational Coordination Centre), will be responsible for specifying the tasks to be carried out during risk situations. This body would be located in the Local Police Headquarters and directed by the mayor, together with an advisory committee, an information office and a communications centre.

Sampere added that these documents complement the Municipal Action Plan for Flood Risk (PAMRI), approved in November 2021 and which the municipality already has “to avoid situations such as those experienced during the episode of the DANA in 2019 and which caused so much damage to our territory”. As the mayor said, “these are essential plans to deal with this type of situation and which any town should have, whose ultimate aim is to ensure the highest level of protection for both the residents of San Fulgencio and their belongings and property”.